Success comes in many shapes and forms, but only a few like Ritesh Agarwal, Founder and CEO of OYO Hotels & Homes, are able to recognize it even in its most famous disguise: failure.

While most people would be quick to describe his life as a typical “rags-to-riches story,” Ritesh’s journey is more of an inspirational tale about a young Indian man who turned his biggest setbacks into one of his greatest successes.

After all, it’s not every day that you hear of a billion-dollar empire being built out of affordable solutions – and even if you did, you wouldn’t expect to find a 20-something college dropout helming it.

But this is perhaps what makes Ritesh’s story incredibly ‘rich’ with hope: it makes ordinary people believe in the extraordinary power of their dreams.

Growing up in India

Ritesh was born in the scenic town of Bissam Cuttack, in the state of Odisha, India. He comes from a family of small-time entrepreneurs who ran a modest business in Southern Orissa.

At the age of eight, Ritesh discovered his love for coding and spent a large portion of his day learning how to code software.

But as much as he loved the tech world, his entrepreneurial spirit eventually took over and pushed him towards starting his first business in his early teens. As a teenager, Ritesh started selling SIM cards in a small Indian town, to make money and get closer to his dream of becoming a successful businessman.

After graduating from St. John’s Senior Secondary School, he decided to move to the capital of India, Delhi. With its high-rise buildings, plethora of opportunities, and rapidly advancing commercial presence, Delhi provided the perfect backdrop for young Ritesh’s entry into the world of business.

He enrolled in the University of London’s International Program at the reputed Indian School of Business and Finance. But soon, he realized that what he really sought was not a piece of paper, but real-world experience. Instead of spending time in a classroom, Ritesh found himself attending events and conferences where he rubbed shoulders with successful business owners.

It was then that he decided to make the toughest decision of his life: to drop out of college and begin his entrepreneurial journey – he was only 17.

Ritesh’s entrepreneurial passion could only be matched by his unrelenting commitment to helping others. So, when he noticed a problem within the budget hotel sector in India, he knew he needed to act fast.

Through his love for traveling, Ritesh had realized just how difficult it was for budget travelers in his country to find decent accommodation that met their basic needs. This made him launch his first large-scale business venture, called “Oravel Travels” in 2011.

Oravel Travels, modeled after Airbnb, sought to address this availability issue by serving as an online booking system. Using the portal, travelers could easily discover pocket-friendly bed and breakfast joints, private rooms, and serviced apartments all across India.

Things seemed to be looking up for Ritesh, and he was even able to secure funding for around $40,000 from VentureNursery, India’s first angel-backed startup accelerator. But he knew there was still more work left to be done.

Ritesh believed in running his company not as a businessman but as a customer first – and the only way to do that was to travel on a tight budget. He started checking into a new hotel room every single night until he ended up staying at over 100 bed and breakfasts all over the country.

It was during this time that he realized the real issue wasn’t just the discovery of affordable hotels in India, but rather the lack of service quality. Ritesh found that budget travelers often had to compromise on essentials such as air conditioning, WiFi, food, bed mattresses, etc. He knew that these problems could be easily fixed using design, technology, and talent – all he needed was money.

Meanwhile, Oravel Travels was struggling to stay afloat. The business model did not suit the Indian market; Ritesh was now left with only Rs30 in his bank account. As he contemplated packing his bags and going back home, he didn’t realize that it would take only a few weeks for his luck to change.

The Unicorn Startup of India

Ritesh decided to give himself another chance. Instead of giving up, he worked on tweaking his original business model for Oravel Travels and submitted it to the Thiel Fellowship – a two-year program that enables young college dropouts to receive a $100,000 grant for building their businesses.

He ended up becoming the first resident Asian to be selected for the grant. This also meant getting an opportunity to learn more about scaling his business from famed Silicon Valley entrepreneurs, investors, thinkers, and visionaries. Ritesh even described it as a “life-defining experience.”

In 2013, Oravel Travels was relaunched as OYO (On Your Own) Rooms. The new model helped participating small and independent hotel owners improve the quality of their services through major and minor upgrades. This included everything from the selection of high-quality bed mattresses to the addition of branded water bottles in every room.

Ritesh even went one step further and supported these hotels in areas such as customer support, revenue management, and online reservations. As OYO’s popularity began to grow, other investors pooled in funds, and the company eventually joined the coveted “unicorn” club – a term used to describe privately-owned startups with a valuation of over $1 billion.

OYO Rooms eventually expanded to become OYO Hotels & Homes, a full-fledged hotel chain that includes more than 43,000 hotels across 80 countries. Ritesh went on to receive numerous awards and recognitions including the Business World Young Entrepreneur Award. He was even featured in Forbes “30 Under 30” list of global achievers.

By 2020, 27-year-old Ritesh Agarwal’s net worth was estimated to be $1.1 billion, making him the second-youngest, self-made billionaire in the world.

Today, Ritesh is reaching out to young business students and aspiring entrepreneurs through his course “How To Turn An Idea Into A Billion Dollar Business”.

The Ritesh Agarwal Academy is designed to help young entrepreneurs learn how to turn innovative ideas into scalable business models. You can look forward to an interactive learning experience and access to exclusive business resources, including a pitch deck and cold email templates. 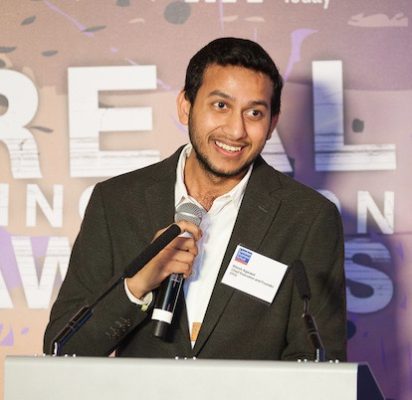 Turn your idea into a billion-dollar business

Turn your idea into a billion-dollar business