How his success is a product of a vision, strategy, and loads of hard work

From being the blue-eyed poster boy of sports in Singapore, to becoming a Tiktok superstar, Ng Ming Wei (also known as Mingweirock) has achieved great fame and fortune – all by the ripe young age of 26. He is currently the most followed social media sportsperson in Singapore.

Ming Wei has managed to carve a niche for himself in every path that he has followed, no matter what it was. As a Taekwondo pro, he is a nine-time National Champion that has even won a medal for Singapore in the Commonwealth Games, but this sportstar isn’t just known for his fighting skills. He is also a global internet sensation with over 18 million fans and close to 350 million likes.

Although Mingweirock’s story is a huge, unexpected turn of events, he has proven his skills to be a champion – inside the arena and beyond.

How did Mingweirock’s Career Start?

Ming Wei was born and raised in Singapore, and lived with his parents and sisters. Like most other children playing sports, Ming Wei also dreamed of winning an Olympic medal one day – and he was committed to making that dream a reality. So, he worked relentlessly and trained extensively for hours. Day after day.

As Ming’s commitment to winning the Olympics got more serious, so did his training. He began working harder and went on to collaborate with other national Taekwondo athletes. He was traveling the world trying to upskill himself in every way that he could – he even spent some time in Norway to prepare himself for the 2020 Olympic games.

Like all other boys his age, he spent his (very limited) free time that he had, on social media. He found an interest in the TikTok platform specifically – and soon after, his father even started an account so that he could stay on top of everything happening in Ming’s life.

And then…there was COVID.

The pandemic forced the entire world back to their homes; and at this point, Mingweirock’s Olympic dreams weren’t looking too good. His training came to an abrupt halt, and he had to resort to online training as the only way to continue his practice – but he knew it wasn’t enough. So, much like the rest of the world, Ming turned to social media in these tough times. He found greater release creating content, and began to invest more time in making TikTok videos.

People were enjoying his videos, but it wasn’t until one special upload that this Taekwondo champ turned into a booming TikToker. And it was all thanks to dad, Cedric Ng.

Ming made a prank video featuring his dad, and it was the first of a series of father-son pranks that has now become a signature style on Mingweirock’s account. People immediately began demanding more of the father-son duo – and Mingweirocks suddenly became a sensation. His viewership catapulted, and within less than a month, his viewership climbed to 1 million.

Ng Ming Wei may have struck a win with his prank, but the brilliance and success of Mingweirocks’ story didn’t happen by chance – it was the product of a vision, strategy, and loads of hard work. That’s probably the reason why Mingweirocks didn’t have slow, organic growth as a content creator, and had an explosion of exponential growth instead.

Ming Wei and his father (now known as “Daddy Ming”) began creating more and more prank videos, with new ideas emerging as they went along. And the best part – most of their videos continue to be shot at home, usually in their backyard. The father-son videos truly had something novel to share.

Their impromptu acts, visible camaraderie, and natural demeanor started catching on. And by working together so much, it even brought them closer to one another as a family.

Mingweirock’s story of fast success spurred him into many sleepless nights where he was living, dreaming and breathing TikTok. But it wasn’t for nothing. He set a goal for himself to grow his initial 1 million followers, all the way to 10 million.

So, he started uploading more regularly, devoted countless hours to brainstorming new, innovative ideas, and he kept up with watching other TikToker’s and studying trends – he put his heart and soul into planning, editing, and filming each video.

In other words, he channeled that same feverish dedication and effort seen in his Taekwondo journey, and used it on Tiktok.

And soon enough, Mingweirocks’ Tiktok following reached its 10 million goal. But it didn’t give Ng Ming Wei the high he had expected. What went wrong? Why didn’t he feel satisfied? In an attempt to find his passion again, he went back to his Taekwondo days. He reminisced about how he would arrange extra training sessions to help his friends – and that’s when it struck him.

Ng Ming Wei wanted Mingweirocks story to be more than just entertainment and fortune… He wanted it to do good for others.

So, he did. He decided that he wanted something  good to come from his content – and this decision even ended up winning him the inaugural Tiktok award, “The Jury Award,” in South East Asia back in 2019.

And guess what? His persistence on social media and drive to create a life he was passionate about, also won him the bid to the 2020 Olympics.

While Mingweirock’s story is one that resulted in fortune and fame, the true key to Ming’s fulfillment was being able to win along with others. That’s why he went on to establish his company, Boom Digital Media, because Ming Wei wanted to help equip others to succeed on TikTok just like he did.

He saw the amazing opportunities that the creator economy held, and all that the online world had to offer – and he wanted everyone to be able to take advantage of it. And most importantly: he wanted to share happiness and positivity.

There are various aspects to being successful on TikTok and on social media in general. And while you need strategies to keep you up- to-date and relevant, Ming Wei has found ways to take it a step further.

Ming Wei has not only created a brand for himself on Tiktok, but has also helped showcase Tiktok as a platform for meaningful interaction, entertainment, and outreach. He created a successful formula on the platform, and established such a positive presence for people all around the world to enjoy – and for aspiring content creators to look up to.

Going Back to His Roots

But all of this time, Ng Ming Wei still couldn’t shake his deep passion and connection with his favorite sport. He could have nominated himself to the national Taekwondo team in Singapore, but he didn’t feel right doing it after having been away from the practice for so long. So, he decided to join the contingent, and manage its social media coverage instead.

Sometimes life takes us in a different direction than we may have intended. But even if we don’t get exactly what we set out for, that doesn’t mean we can’t still do something amazing – in fact, we may even be able to do something even better. While Ming may have only had his sights set on the Olympic gold medal, he still discovered a whole new passion that he never knew was there, simply by picking up TikTok and giving it a shot.

Minweirock’s story has shown us that, if you work hard enough, you don’t need a background in anything to be successful. You don’t need a plan. All you need is passion and drive to create a  better world around you – and you can do the unthinkable.

Want To Learn How to Crush It On TikTok Like Mingweirock?

Become the next big TikToker with Mingweirock’s “How To Crush It On TikTok” course.

Get insider tips on how he grew to over 18 million followers, and learn how you can create viral content and make a career out of it too! 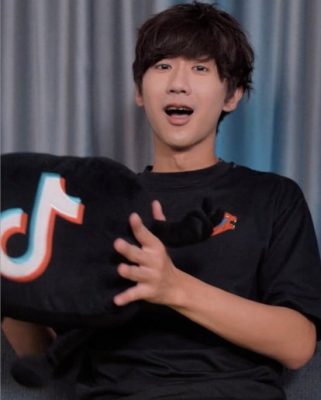 Learn how to crush it on TikTok

Learn how to crush it on TikTok