Brent Rivera’s Net Worth: Taking Over Social Media, One Platform At A Time

Keeping his content fresh after 10 years on social media

Brent Rivera is an American YouTuber, social media personality, and actor. He runs a YouTube channel where he uploads videos of himself doing pranks, challenges, interviews, and funny skits. As of 2021, Brent Rivera’s net worth is estimated to be $6.5 million.

Brent first became popular with his Vine account “thebrentrivera,” accumulating over 8 million followers. In 2009, he created his own YouTube channel, which currently has  16.5 million subscribers and over 3.5 billion views. His videos mostly include personal life vlogs, pranks, celebrity interviews, and challenges.

Who is Brent Rivera?

Brent Rivera was born on January 9, 1998, to John Rivera and Laura Rivera in Huntington Beach, California. His father is a firefighter and his mother is a teacher. He is an American national and comes from Latino and Caucasian descent.

Brent has three siblings, namely Brice Rivera (older brother), Blake Rivera (older brother), and Lexi Rivera (younger sister). His family members and siblings often appear in his videos – but his sister Alexa, also known as Lexi, has the most active participation in his videos. Brent Rivera completed his schooling at the Huntington Beach High School, California, US, and joined the California State University Long Beach for further education.

How Did Brent Rivera Become Successful?

Brent had dreams of becoming an entertainer since the age of 10. He has been making YouTube videos since he was 12 years old – but what really made him an internet sensation was when he started making Vines in 2013. His Vines were funny, lighthearted, relatable, and hilarious.

His sister often made appearances in his early videos, and together they would dance, perform skits, and pull pranks on their mother. Brent has been making videos for a decade now and shows no signs of slowing down. In fact, his videos just keep getting better. And he isn’t just a talented video creator – he’s also got quite the voice. His song “Doubt Your Doubts” was released on iTunes in November of 2014.

In 2016, he became the face of Hollister’s anti-bullying campaign, and he used this opportunity to spread awareness around bullying and cyberbullying – something he has dealt with on his personal social media channels.

Brent also raised money for the cause and elaborated on how the bullying he experienced was at its worst at the start of his career. Since then, he has always been a spokesperson for anti-bullying and often uses his social media platforms to educate his followers on the subject.

In 2017, Brent got a chance to discover his acting talent when he appeared in the show, Alexander IRL, as “Alexander” – a high school student who threw a party in a bid to become one of the “cool kids.” He also played Issac Salcedo in the show, Light as a Feather, from 2018 to 2019, and starred in Brobot – a sci-fi series where Brent’s character navigates a new town, and a new crush, with the help of top-secret artificial intelligence.

Plus, he is also a member of the global network, Fullscreen Network, that aims to bring brands and content creators together for collaboration opportunities.

How Did He Make His First Few Millions?

Brent is referred to as one of the top-grossing YouTubers in recent times. He has 16.5 million YouTube subscribers and uploads a new video every week. With over 3.5 billion views, it’s no wonder that Brent Rivera’s net worth has grown tremendously over the years. He has collaborated with his friends like Lexi Hensler, Eva Gutowski, and Ben Alert to create unique content filled with fun and humor.

He also uploads daily vlogs on his channel – but his most viewed videos though are his pranks and challenge videos. He featured Eva Gutowski in his October 2018 video “WEARING LONG ACRYLIC NAILS FOR 24 HOURS!!” – earning over 31 million views.

Brent has also won numerous awards in his 10-year career as a content creator. In 2015, he won the “Best Dressed” Award at the MTV Music Awards in 2015. A few years later, he was nominated for “Choice Male Web Star” and “Best in Lifestyle” at the 2019 Teen Choice Awards and the 9th Streamy Awards. And only one year later, in 2020, he won the Juanpa Zurita’s Creator Honor Award at 10th Streamy Awards.

Brent Rivera’s Net Worth and Earnings

As of 2021, Brent Rivera’s net worth stands at $6.5 million (which is wildly impressive for a 23-year-old). In fact, he hit his first million dollars in 2016 when he was just 18 years old. He’s done well monetizing his online presence over the years and is one of the youngest millionaires in California.

Brent’s biggest source of income is his YouTube channel. He uploads a new video every week, clocking in an average of 3.4 million views per day. With monetized YouTube channels earning $3 to $7 for every one thousand video views, Brent’s channel is predicted to generate $186,000 in ad revenue each month or $2.79 million a year.

Brent Rivera also generates income through being a social media influencer. He promotes products on his channel, engages in brand sponsorships, and generates revenue through affiliate commissions. In fact, he makes even more money through sponsorships on his Instagram account for brands like Colgate. Brent reportedly charges between $30,000 to $60,000 per Instagram post.

On TikTok, Brent has accumulated 1.2 billion likes and uses this platform to promote brands – ultimately boosting his net worth even further.

We assume Brent also charges a hefty sum for his acting gigs on TV and makes even more money from his clothing line, Relatable Apparel.

Beyond this, Brent has also gone on to collaborate with brands to create products as an additional source of income. In April 2021, Brent and his sister Lexi teamed up with Canal Toys for the launch of “Studio_Creator 2 Video Maker Kit.” Canal toys is a global leader in the design, manufacturing, distribution, and marketing of activity toys.

The “Studio_Creator 2 Video Maker Kit” was a kid’s production kit that included a ring light and a green screen, allowing young people to transform any space into a custom studio and express themselves through creative, digital content.

Brent has further endorsed famous brands like Coca-Cola, Starbucks, and iPhone – and he has even appeared in a campaign with Alexis Zall to help raise awareness on tire safety.

But Brent isn’t just a social media star and brand ambassador, he is also the CEO and co-founder of Amp Studios, which is a talent and content group. His company sources promising young people, and helps them become social media stars and content creators just like him.

Brent is one of the highest grossing YouTubers who has managed to keep his content fresh for a decade. As a social media star, he has taken advantage of all the major social platforms and built a name for himself by swiftly adapting to different content styles.

Brent has proven to be a successful influencer and has leveraged the creator economy to build a significant net worth for himself – all while creating relatable content and raising awareness for social issues that matter to him, such as online bullying.

Brent has clearly established himself as a leader in the industry and has already taken an educational approach to his content (which is also how he’s been able to stay relevant). But now Brent could take it one step further and even substantially grow his net worth by turning his content creation knowledge into an official structured online course.

Creating a cohort-based, interactive learning experience would be the perfect next step to help Brent give back to his audience and boost his online presence (and generate a potential 6 or 7 figures in extra revenue).

Brent could teach creators how to stay ahead of the game and help brands and businesses diversify their reach. Or, better yet, he could teach how to deal with online bullying or how to squash hate in the media landscape.

Becoming an educator and making your knowledge accessible to the world can prove to be an advantage for both you as a creator and to your audience. And Brent’s 10-year long creator journey is a testament that he’s only just getting started. Launching a course can help inspire his followers to chase their dreams and do what they love too.

5 years ago, the world had 5 million social media creators. Today, that number is over 50 million.

Welcome to the Creator Revolution. Now, for the first time ever, you can actually get a job doing what you love.

You can be a social media manager, a digital marketer on TikTok, or a community manager on Discord. Not only are these the world’s newest jobs, they are guaranteed to be in-demand in future. And they are way more fun than your average 9 to 5, and pay even better! But there hasn’t been one single place to learn all these skills. Until now.

This is the Creator Accelerator Program. We designed this program to help you skyrocket your career as a creator. From learning how to grow on social media platforms, to building a network and accessing job opportunities with the world’s top brands – this immersive program will transform your career in just 5 months. 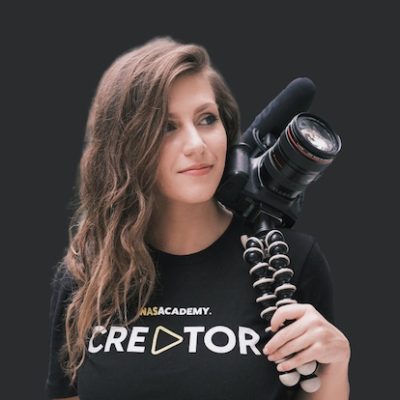 Want to learn how to crush it on TikTok?

Want to learn how to crush it on TikTok?

Jay Shetty’s Net Worth: The Monk Who’s Crushing It On Facebook

Lele Pons’ Net Worth: Her Journey To Social Media Domination