Note from the CEO... 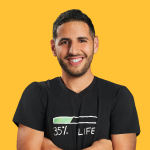 I am excited (and nervous) to announce that we raised $11M Series A round led by Lightspeed Ventures. In the following blogpost, I would like to explain who we are, what we are building, and most importantly, why we took the money.

Raising a round of funding was a serious decision. It is not something I took lightly. Other people’s money is more important than mine. Plus, we were profitable from Day 1. So naturally it took at least 2 years to make this decision.

In a nutshell, we raised Series A Funding because we believe the opportunity lying ahead is simply too exciting to miss.

5 years ago, when I embarked on the Nas Daily journey, there was no concept of TikTok, Instagram Videos, Snapchat Discover, Facebook Watch, Substack, or YouTube shorts. In fact, Creators only had a few avenues to create. I remember YouTube vlogging was particularly popular back then. But it was not something I was interested in. So I took a chance on making Facebook videos, with no monetization abilities or Creator support.

Fast forward 5 years, Nas Daily has grown to over 43 million followers across the Internet in 14 languages and 5 platforms (including Douyin in China). I never planned to be a Creator. It was just something that fell on me. In a previous life, I was an average Software Engineer. But as I went through the Creator journey, I had two important observations:

1) Creator is the best job in the world. In fact, it will be the only job left in the world. Everything that can be automated will be. Everything that requires human creativity will not (for now). Instead of doing menial repetitive tasks, humans will be using their creativity to do more humane and creative tasks.
As silly as a dancing TikTok video can be, under the right circumstances, one TikTok video can ultimately lift an entire family out of poverty. Educational TikToks can educate generations too. And it is estimated that there are 50 million Creators on the Internet today. This number will only grow.

This is the opportunity we’re staring at. We call it “CreatorTech.” It is the idea that technology should put Creator First, and not only Customer First. It is the idea that Creator brands should be preserved and their value should be rewarded. CreatorTech also recognizes how hard it is to be a Creator and doesn’t expect you to sacrifice mental health to stay relevant.

We are going on a 100-year journey to build technology that empowers Creators on the Internet. We believe there is still a lot to build that other platforms are simply not building. So, what do we build?

We didn’t want to start with helping Creators sell more plastic crap. We think there are enough solutions for that. We wanted to start with something more meaningful: Education.

I won’t go on an endless rant about why education is broken. COVID has made it very clear that we are not going back to the old ways of teaching. In fact, it is only a matter of time until traditional, 4-year, $100,000+ universities go out of business. The question is…what will replace them?

Nas Academy is a Platform for Creators to Start their own Academy.

We help Creators productize their knowledge. There is a lot of knowledge stuck inside Creators’ brains. Only select people can get access to it. Basically, we want to download that knowledge and share it with the world.

We help Creators build a full-fledged Academy. With our technology, a Creator can teach students in cohort-based settings. We invented a hybrid learning experience that saves Creators time, but increases completion rates by 7x.

Let me be clear, we’re not just in the business of selling video files. Nas means “people” in Arabic. At Nas Academy, you learn from real humans, with real humans. That’s why we believe community is key. 100 students are placed together to learn and get to know each other through live sessions, WhatsApp groups, and Alumni circles. “Cohort-based learning,” as they call it, is the future of Education. Period.

Using our tools, Creators don’t need to build complicated landing pages. They don’t need to use five different services to get feedback, give homework, do live sessions, or upload videos. Our solution is an all-in-one Academy solution for Creators.

We have generated over $2m from Education for our first 5 Creators. MasterClass has built an incredible Educational product out of 100 Masters. But we believe there are 100,000+ other Creators who are being left out. Their academies can generate significant income for them, of course, but also significant good to the world.

I am excited by the future of technology for Creators. And I am not the only one. I have been lucky to be surrounded by a remarkable team who come from great companies like Uber, Grab, TopTal, Visa, and many more.

We are also honored to have the backing of incredible investors, such as Lightspeed Venture Partners (who invested in us at the Speed of Light). They are joined by TechAviv, 500 Startups, Graph Ventures, FreshFund, Metapurse, Balaji Srinivasan, Emilie Choi (President & COO of Coinbase), Ritesh Agrawal (Founder & CEO of OYO), Markian (a creator with over 10 million followers), the founders of Jellysmack, and many others.

I once met a Private Equity Investor who researches thousands of companies, every year, from all around the world, in order to find the best ones to invest in. I asked him a simple question: “What is the #1 indicator, in your opinion, that a company is gonna grow?”. I expected him to answer with some boring metric like “P/E Ratio” or “Cash Balances.”

His answer, however, shocked me. He stared at the ground for a bit and eventually said: “Sentiment of the CEO.”

My Sentiment and the Sentiment of the entire team couldn’t be any higher.

Come join us on this mission.