Ryan’s World’s Net Worth: This 9-Year-Old’s Revenue Will Blow Your Mind

It’s Ryan Kaji’s world, and we’re just living in it

Would you believe us if we told you that, for the past 3 years, the highest paid YouTuber in the world was just a 9-year-old kid? Well, it’s true. The star of the popular channel Ryan’s World, Ryan Kaji, earned nearly $30 million dollars last year and his net worth is estimated to be $32 million as of 2020.

He’s likely worth much more already – and if he isn’t, he definitely will be by the end of 2021.

Who is Ryan’s World?

Ryan’s YouTube career started in 2015 at 3 years old, when his parents would film him opening and reviewing new toys daily just for fun. Back then, the channel was known as Ryan’s Toy Review; and within less than 2 years, by the age of 5, his videos were raking in millions of dollars and getting billions of views.

His videos held a charismatic charm and energetic presence that attracted parents and kids alike. But as Ryan’s following grew over the years, his content did too. It wasn’t long after they began the channel that it became evident Ryan had something special, so they expanded the brand into an “empire” – now called Ryan’s World.

They started producing a wide array of content and expanding the brand beyond what the Kaji family ever thought possible.

Ryan’s World has now grown across nine different YouTube channels, each one focusing on a persona that was created by Ryan on his main channel. This includes Combo Panda, Gus the Gummy Gator, and more.

As Ryan grows up, his main channel has moved from just toy reviews, to entertaining videos that reflect all of his interests. Now, he creates various types of videos from him doing science experiments, playing games, going on adventures, and more.

He’s even started teaching science, geography, natural phenomenons, and general life skills – like how to brush your teeth. As he’s expanded his channel to incorporate educational value alongside showcasing the general fun of being a kid, Ryan’s World’s net worth has been continuously growing at an insanely fast rate.

The Success Story of Ryan’s World

Ryan’s Toy Unboxing seemed to pioneer it’s own style of unboxing videos, holding a certain charisma and charm that viewers couldn’t get enough of. And over the years, through consistent posting and having Ryan’s bright personality up front and center, his main channel has accumulated over 30 million followers and more than 48 billion views.

One of Ryan’s videos that exploded early on in his YouTube career, was a video titled: “Huge Eggs Surprise Toy Challenge,” created back in 2016. This single video (showing Ryan running around a bouncy castle, collecting eggs with toys inside) has reached over 2 billion views and, as of December 2020, was ranked as one of the 60 most-viewed videos in YouTube’s history.

Yes. That’s right. It has even outdone the “Charlie bit my finger!” video.

Since Ryan’s World blew up, the Kaji’s started opening up Ryan’s other channels to create new avenues of generating income. This way, Ryan wasn’t required to be on camera full-time to keep growing his net worth. Each of these channels have gained over 1 million followers, which prompted the Kaji family to manage it all by establishing an entertainment company – Sunlight Entertainment.

Since signing onto TV contracts and working with countless brands to create themed merchandise, Ryan’s World’s popularity has skyrocketed. He was featured in the annual “Macy’s Thanksgiving Parade” extravaganza in New York City – yet another example of how Ryan’s presence is jumping off the screen and into the real world faster than ever.

Ryan’s World’s net worth has been significantly growing at a steady rate from the beginning. Between 2016-2017, only 2 years since starting his channel, he had already made $11 million in revenue. In 2018, his annual income had doubled to $22 million; and in 2019, he earned $26 million.

As Ryan has grown up, his content has changed along with him. Since diversifying his stories into education as well as entertainment, he’s been able to maintain a steady growth of followers.

Based on Social Blade’s report, over the past 30 days alone, Ryan’s World has an estimated 482 million views. Which, surprisingly, is actually slightly lower than his 500-700 million average that he’s been receiving over the past few years.

Ryan’s World YouTube channel is now at 30.4 million subscribers, with over 48 billion views.

And this kid hasn’t even been to high school yet.

Ryan’s World’s Net Worth and Income

Ryan’s World’s net worth is estimated to be $32 million, but some reportedly believe it’s even more.

The largest contributor to his net worth has typically been ad revenue from his YouTube channels. But in 2020, that all changed.

As of last year, the amount of Ryan’s World-branded products sold accounted for 60-70% of the $30 million the Kaji family made in annual revenue. He’s partnered with countless leading brands and is selling his products in stories like Walmart and Target.

With over 5,000 different Ryan’s World branded merchandise pieces (including bedroom decor, action figures, and even face masks), this revenue stream brought in over $250 million in sales in 2020 alone. 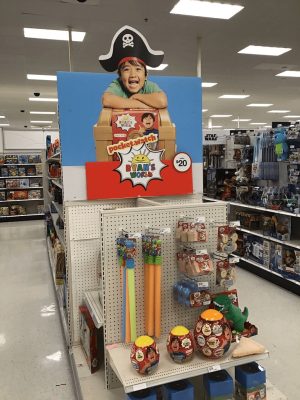 Ryan Kaji is reportedly making over $2 million a month from ad revenue on Ryan’s World’s YouTube channel – presuming he’s making the standard $5 per 1000 views that YouTubers generally do. He could be making upwards of $29 million a year in total ad revenue from this one channel alone.

Ryan’s World and the Kaji family have taken on many more collaborations and adventures to increase Ryan’s World’s net worth even further. They signed a TV show deal for Ryan’s Mystery Play Date on Nickelodeon (which is sure to continue bringing them millions of dollars in extra revenue) – now also streaming on Amazon.

Not to mention, the Kaji family has been working on a recent collaboration with footwear brand Skechers, to create even more Ryan’s World-themed merchandise.

As for social media, Ryan Kaji has an Instagram account, but it doesn’t harbor nearly as many followers as his YouTube channels do. With his 150,000 followers on the platform, it’s estimated that he could make an additional $15,000 per sponsored post – slowly adding onto Ryan’s World’s net worth as a whole.

And as for the entire family (with all of their channels and other endeavors combined), the Kaji’s net worth is estimated to be in the 9-figure range.

All the channels behind Ryan’s World have accumulated over 45 million subscribers, and his main channel currently has a daily average view count of over 16 million. Within the past 30 days alone, his main channel has gained an extra 200,000 subscribers – ranking 96th on the list of YouTube’s most subscribed channels.

Ryan’s World has even topped the highly successful MrBeast, makeup influencer Jeffree Star, and many other sought-after creators.

One can imagine that Ryan’s journey to becoming such a famed creator, as a young child, would be an exciting journey – but a difficult one too.

Along with the soaring successes achieved by the family, there has also been some controversy to go with it. Concern was raised over the initial messaging behind Ryan’s World – as some said his videos were an unhealthy promotion of materialism. And, furthermore, a complaint was filed in 2019 to the Federal Trade Commission (FTC) accusing the Kaji’s of “blurring the lines” between content creation and promoting directly to vulnerable children, which is against regulations.

The lawsuit was settled by Google for $170 million; and there has since been more strict privacy and advertising regulations put in place – but Ryan’s World still managed to stay at the top of the list of the most popular YouTube channels to date.

How Did He Do it?

You may be wondering – how did a kid that could barely walk get so much recognition and money, in such a short period of time? It’s arguably because of the unique, charismatic style in Ryan’s World’s videos that resonated with families and kids everywhere. But it’s also because they continued to diversy his content.

And as Ryan has grown, he’s naturally turned into more of a leader, teacher, and role model to other, younger kids – rather than just being another kid on the internet playing with toys. By taking this step and continuing to provide value, more and more parents are going to find his content suitable for their children.

This is what’s going to keep Ryan’s World going for many years to come.

Growing up in this industry, Ryan is sure to have learned, and is continuing to learn, a lot about what it means to be a creator online.

But he is proof that becoming a YouTube personality and an educator, rather than one that is solely focused on promoting material joy, is what allows anybody to thrive within the creator economy. As we’ve seen first-hand at Nas Academy, it’s the natural unfolding of every successful creator’s journey who wants to scale and build an impressive net worth.

Even though Ryan’s parents were initially responsible for starting the channel, Ryan’s World’s net worth and success is proof that traditional education isn’t required to have a career doing what you love. Neither of Ryan’s parents were educated in content creation (his mom was a teacher and his dad was an engineer), and Ryan is still too young to even think of university yet!

We hope to be able to instill this same kind of success in our creators at Nas Academy by providing accessible courses and advice directly from the top sources themselves. And while Ryan may not be old enough yet to be running his own course, it’s definitely an avenue you might see him pursue as he turns to building his presence – especially on TV.

We can learn a lot from what this 9-year-old internet sensation has done so far. We can see that it doesn’t matter who you are or how old you are, if you have a story to share, share it – and you might just create a whole new world of possibilities for yourself that you never could have imagined.

Check out the Viral Video Formula course by Smile Squad. Our team of talented trainers will help you learn how you can build your own killer videos and get on your way building your very own YouTube success story.

Or, if you’re already a seasoned creator, start your own academy today! Join us at Nas Academy and become an educator today – it only takes a few simple steps to start telling your story, and start connecting with hundreds of passionate students around the world.

Jay Shetty’s Net Worth: The Monk Who’s Crushing It On Facebook

Lele Pons’ Net Worth: Her Journey To Social Media Domination