The fourth Miss Philippines to be crowned Miss Universe.

There’s far more to Catriona Gray than meets the eye.

In fact, long before she was crowned a queen, Catriona was already becoming an inspiration for countless people in her country through her work with various charitable organizations.

Entering the Miss Universe pageant only served as a means to bolster those efforts further – and it ended up winning her the world.

While never a typical beauty queen, she has always lived her life with purpose – and continues to do so. From growing up in an immigrant family to shattering stereotypes about ‘perfection’ in the pageant world, Catriona Gray’s story clearly shows the power of being true to oneself, and how it can help anybody take over the world.

Catriona was born in Cairns, a city located in the Far North Queensland region of Australia. Her father Ian Gray is Scottish-Australian, and her mother Normita Ragas Magnayon is from Albay, Philippines.

Her father worked as a civil engineer, which meant Catriona’s family travelled around the country quite a lot. This included having to start over from the beginning each time and making new friends all over again too.

As a result, she withdrew into her shell and became an extremely shy kid – the fact that she was an only child meant that Catriona had nobody else to share her experiences with either.

Even though she longed for siblings, her parents had decided early on not to have any more children. So, instead they sought to fill her life with a variety of experiences and talents.

They enrolled her in a martial arts class at the age of 8, and she ended up getting her first black belt by the time she was 12. While she enjoyed practicing martial arts, Catriona never considered herself sporty mainly because of her height – she was 5ft 8in.

Growing up tall and awkward, she learned to love herself at an early age and decided to focus on the things she had rather than what she lacked – a trait she’d carry on well into adulthood. At Trinity Anglican School, Catriona discovered her love for singing and she became the lead singer of her school’s jazz band. She also took part in everything related to the performing arts such as singing, dancing and drama.

“When I was young, I did varied after-school activities – I did art, drama, science, math. I’m not the sporty kind of person, but I did get a certificate on outdoor recreation.” – Catriona Gray

After graduating from high school, Catriona decided to pursue her love for singing and enrolled online for a Master’s program in music therapy from Berklee College of Music located in Boston, Massachusetts. Since her early childhood involved lots of traveling and sports, she had also developed an interest in adventure and the outdoors – earning her a Certificate in Outdoor Recreation.

Although Catriona had been winning beauty pageants since childhood – she was crowned Little Philippines in Sydney when she was just five years old – she did not enter another one until she was 21. So, after graduation, she used up her money from her previous gigs to buy a ticket to Manila where she’d start her career as a professional model.

She immediately caught the attention of Cosmo Magazine and went on to be featured in it as one of the top models in the Philippines. This led to a number of commercials, TV shows and fashion events for several years including the famous Pantene #WhipIt TVC – Catriona had also provided vocals for the background music of the commercial.

Gradually, projects started slowing down and Catriona found herself struggling to make ends meet. Being the sole breadwinner of her family, she had to figure out what to do next.

While it would have been easier for her to simply wallow in self-pity, she instead turned her attention to those less fortunate particularly in Tondo – one of the poorest neighborhoods in Manila. She began working with a non-governmental organization called Young Focus Philippines which seeks to provide free education for the children in Tondo.

It was around this time that Catriona began to realize the potential of using beauty pageants as a platform for highlighting the plight of the poor in her country. She saw it firsthand when her close friend, Valerie Weigmann, joined a national pageant and won Miss World Philippines 2014. This motivated her to combine her charity work with the possibility of a career in pageantry – and she hasn’t looked back since.

Catriona entered the sixth annual Miss World Philippines pageant in 2016 – a decision that even surprised her. Interestingly enough, during the final question and answer round, she spoke at length about a charity close to her heart:

“To be a Miss World is to be passed a torch that burns with passion and purpose. If I am to become Miss World Philippines, I will dedicate my voice and essence to carry that torch and to set charitable causes alight, such as my personal advocacy, the Paraiso Bright Beginnings Project. And I would focus on passing on this torch to empower others because I believe together there is no darkness in this world that our light cannot overcome.”

Even though she was told she wasn’t “Filipina or fierce enough” to make it to the national pageant, Catriona went on to win Miss World Philippines 2016. This qualified her to compete at the international Miss World pageant – a title she eventually lost to Stephanie Del Valle, of Puerto Rico.

But instead of giving up, she decided to come back even stronger. Catriona joined Binibining Pilipinas, the biggest national beauty pageant in the Philippines, in May 2017 and began training for the next Miss World pageant. Under the guidance of Carlos Buendia Jnr., she attended weekly classes for the paserela walk and public speaking.

This gave her the confidence she needed to go back on the runway and submit her application form at the Binibining Pilipinas office in the Araneta Center – Catriona had now officially joined the 2018 national pageant.

During the preliminary stages of the Miss Universe contest, Catriona managed to impress even supermodels with her famous “lava walk” – a slow-motion walk that created a storm on the Internet especially when a clip of it was retweeted by Tyra Banks.

She proudly represented her country by donning a tattooed bodysuit together with a headpiece and brass accessories – all created by local artists and fashion designers. The outfit represented three indigenous tribes of the Philippines: Luzon, Visayas, and Mindanao.

In the final round of the competition, host Steve Harvey asked the top three contestants one question, “What is the most important lesson you’ve learned in your life and how will you apply it to your time as Miss Universe?”, Catriona’s winning response did not surprise those closest to her:

“I work a lot in the slums of Tondo, Manila and the life there is very… it’s poor and it’s very sad. And I’ve always taught myself to look for the beauty in it; to look in the beauty in the faces of the children, and to be grateful. And I would bring this aspect as a Miss Universe to see situations with a silver lining, and to assess where I could give something, where I could provide something as a spokesperson. And this I think if I could also teach people to be grateful, we could have an amazing world where negativity could not grow and foster, and children will have a smile on their faces.”

By the end of the night, Catriona became the fourth Miss Philippines to be crowned Miss Universe with two grand homecoming parades awaiting her back home. Today, she stays true to her word and continues working with several charitable organizations in her country. One of them is Love Yourself PH which aims to eliminate HIV/AIDS stigma in the Philippines.

Her personal advocacy called the Paraiso Bright Beginnings Project provides scholarships to underprivileged children in the Tondo neighborhood – and she encourages people to donate through concerts and various fundraising events.

Catriona’s Quotes About Life and Beauty

“I just constantly tell myself that I should be the only one to define my worth and what I’m capable of and how I perceive myself. And that I should never source that worth from other people, especially strangers on social media. They don’t know who I am, the length of my journey, who I am as a person.”

“I think we are moving to that place where we are being celebrated for our character, our inside, our wit. I think that’s the direction we should go because that’s what defines you as a person, not a number on a scale.”

“To see that I have this huge platform now, and so many people are listening to what I have to say, it really makes me want to orientate toward something that would really educate people, create awareness, do something more than just show them a cute outfit or what I’m having for lunch.”

Today, Catriona’s moved beyond the runway to launch her own Academy. For the first-time ever, she has teamed up with Nas Academy to teach you how to become a queen in your own life.

Through her course “How To Be A Queen”, Catriona will share lessons from her pageant days that helped her take over the world.

This includes simple tips on how to prepare for important social occasions, avoid conversational ‘car crashes’ and handle criticism.

She’ll also teach you how to identify everyday triggers and the different coping strategies that can help you deal with them. So that by the end of the class, you’ll know how to put your best foot forward both on social media and in real life. 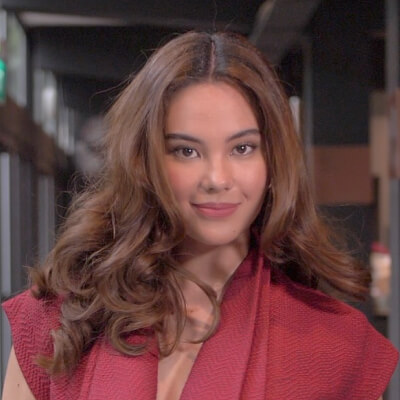 Learn How to be a Queen

Learn How to be a Queen