Learning the language of photography

What is bokeh? What is the difference between aperture, f-stop, and ISO?  All these photography terms are enough to make anyone’s head spin and give you the urge to give up and run away.  Why do we need to know these words if our phones take acceptable photographs, anyway?

There are a bunch of reasons you’ll want to learn these words but the most important one is that they’ll take you from taking good photos to taking incredible ones. Your camera can be a maze of confusing words and buttons, but once you know what they do everything will fall into place and suddenly not seem so scary. 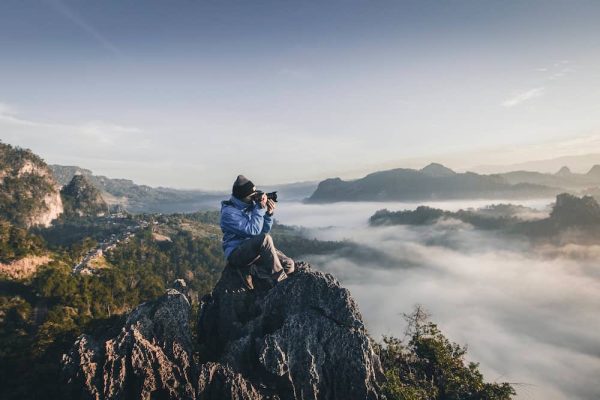 Notice how some photos have backgrounds and foregrounds that are completely blurred out, but a small range in the middle is in focus? This is achieved through changing the depth of field of an image. Depth of field simply means how much of your image is going to be in focus.

A shallow depth of field means that the background will be blurry and only a small amount of the image is in focus out of the entire focal range that exists – from the farthest point in your image to the closest.

This is often used for taking closeups or portraits, or when you are trying to draw attention to a very specific element in the photo. A wide depth of field means that everything from the closest to the farthest point in your image will be in focus, as often seen in landscape pictures. 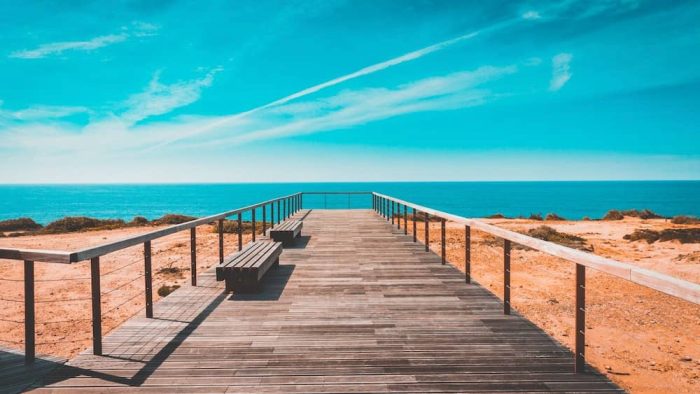 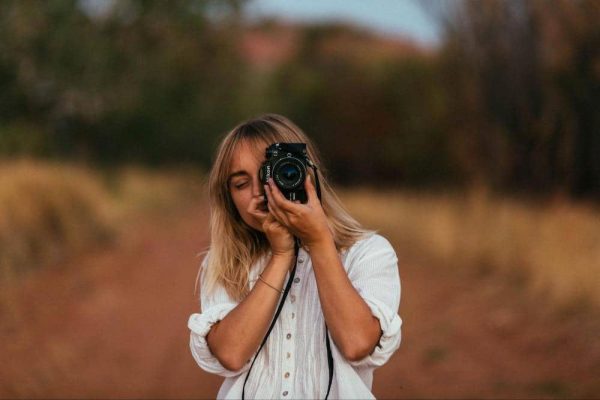 The aperture of your camera is simply the opening that allows light into the camera to capture the image. When you adjust your aperture, a part of the camera called the diaphragm will open and close to either let in more or less light – as you can see in the image below.

The f-stop (also called f-number, f ratio, or focal ratio) is the measurement of how large or small the aperture is on your camera. You probably have seen f/2 or f/1.8 or f/16 and have no idea which means what.

But basically, the smaller the f-stop number, the wider the aperture is going to be. Having an f-stop of f/16 will actually give you a smaller opening in the aperture than f/2.

With every stop you open up or close, you are either opening or closing the aperture twice the amount it’s currently set. 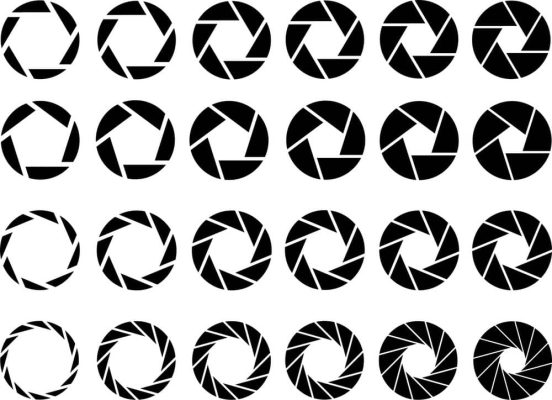 For context, low light shooting would require a lens with a lower f-stop, because you want to be able to let as much light in as possible, without adding grain through bumping up your ISO.

And then, if it’s too bright, your f-number would want to be higher so you let in less light. When photographers say “stop down” or “open up”, it simply refers to lowering the f-stop number, to open up the aperture to let in more light.

ISO cones from “International Organization for Standardization” – although it doesn’t directly refer to the organization itself. When it comes to your camera, ISO is simply used as a term to describe how sensitive your camera sensor is to light.

If you have a higher ISO this means that your camera will be more sensitive to light, and will result in more grain in your image.

If your ISO is lower, your sensor will be less sensitive to light, and you will keep more of the real details in your image. Often, in low light, beginner photographers will bump up their ISO really high to capture as much light as possible – but this also creates more grain in your image.

Although it’s good to adjust your ISO higher at times, keeping it relatively low and adjusting your lights on set as much as possible is usually best. 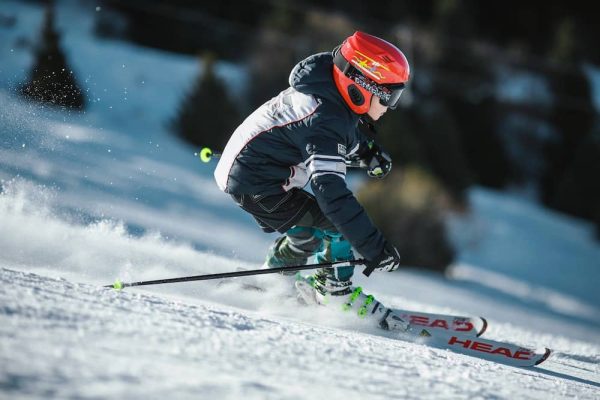 When trying to capture swift movements, it’s best to use a quick shutter speed. Using a slow shutter speed will expose the sensor for too long. This would capture a blur of movement rather than a single frame of the movement..

Exposure refers to how much light your camera sensor (or film in an analog camera) is exposed to. When an image is overexposed, that means that too much light is being let into the camera, blowing out the details of the image.

If an image is underexposed, this means not enough light is being let in. Your exposure is controlled by a combination of your aperture, ISO and your shutter – which is often referred to as the exposure triangle.

As each one relies on the other, digital cameras will often have priority settings built in to help you adjust the settings of the rest when one is changed.

There is also a difference in weight, as analog tends to be heavier, as well as more expensive than DSLRs.

The single-lens reflect design simply means that both of these cameras have an “optical viewfinder” which will take the image that is being captured through the lens, and reflect it back to the user using a mirror, so it can be seen through the viewfinder.

In mirrorless cameras, light goes directly through the lens and hits a sensor. This means you can see a direct, live view of the image that you can adjust before you capture your image.

Meanwhile, with most SLRs, you only see a reflected image of what you’re about to capture, and have to take the image first to see if your exposure or saturation is okay.

Mirrorless cameras are often lighter in weight, they use the electric viewfinder to allow you to see the adjustments you are making before capturing, and they tend to be quieter as well.

The white balance of your camera is the feature that allows you to adjust the color temperature of your image. There are different temperatures that will appear in your photos depending on what lights are used, and conditions you are in. For example, the midday sunlight coming from behind a cloud is going to be much cooler than what it would look like at the golden hour.

Depending on your lights and conditions, you might find your image looks too orange or blue, or may even have a mix of both and look unnatural. To fix this, you’re going to want to adjust how your camera is reading the white light in your image, and help bring it back to a natural color temperature.

By adjusting your white balance, it will add the opposite color into your image, and help bring your color temperature back into balance. You can adjust your whites by using presets that are often available on your digital camera, or you can fix it in post if you are shooting with RAW files.

Have you ever seen those images of waterfalls where the water looks blurred, stretched-out, and silky smooth? This is an example of long exposure. This photography technique is achieved when the shutter of the camera is set to stay open longer while taking an image, and then captures the movement of the subject over a longer period of time, resulting in a blurred effect. 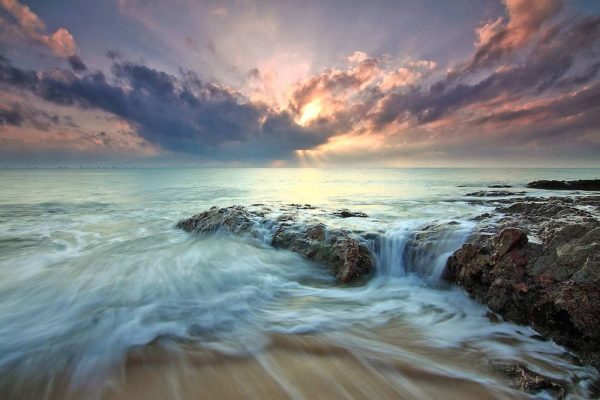 The composition of your shot is simply the framing of your image, and how each element is spaced out and arranged in your shot. Some important elements of composition that you should consider to help you take great photographs are the placement of lines, your choice of color, texture, value, space and overall, how you use different techniques and principles to tell a story within your image.

White space is another word for empty space, or negative space in your image. It is the space that is not cluttered, and that adds room to breathe in your photograph. Often, great photos use a balance of negative space and positive space, and use the negative space as a way to frame their subject, and draw focus to them.

Check out this incredible use of whitespace by popular YouTube photographer, Jordan Matter: 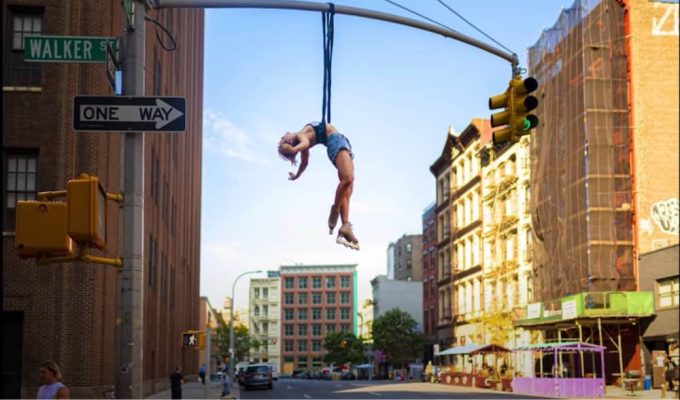 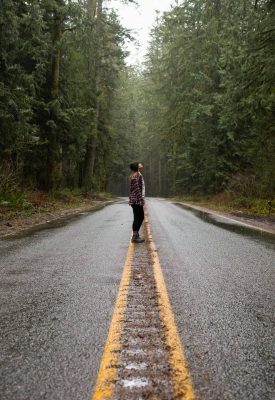 The rule of thirds is a common compositional technique used by photographers to help create an aesthetically pleasing image. While it’s not the “solve-all” to getting a great image, you will see this rule used in film and photography alike, and it usually helps to add interest and a look of professionalism to your work. The rule of thirds is simply where your image is divided into three sections, horizontally and vertically, and in portraiture for example, placing your subject on these vertical lines will often create an aesthetic composition. 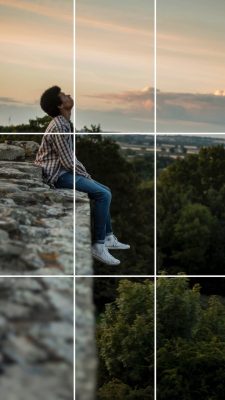 But, while this is extremely popular amongst photographers, it is only one of the many compositional guides and techniques out there. Using it doesn’t automatically mean you will end up with a pleasing image, or that deviating from it means you can’t create a beautiful photograph.

In lowlight conditions, you have a smaller dynamic range because the difference between the lights and darks becomes less apparent. On a sunny day outside, the dynamic range would be large – because you have strong highlights from the sun in the sky, but if you look under trees or houses, there are solid, dark shadows. But as long as the dynamic range of your environment matches what the dynamic range achievable by your camera, then you will get a properly exposed image.

Aspect ratio is simply how tall and wide your image is. A 16:9 ratio is the same thing as 1920x1080p – which describes how many pixels there are vertically, and horizontally in a digital image. Different aspect ratios can give you different styles, and draw focus to different parts of your image. Often, landscapes are shot in 16:9, but if you want to draw focus to the foreground or a portrait, you would consider using an aspect ratio of 2:3 or similar. 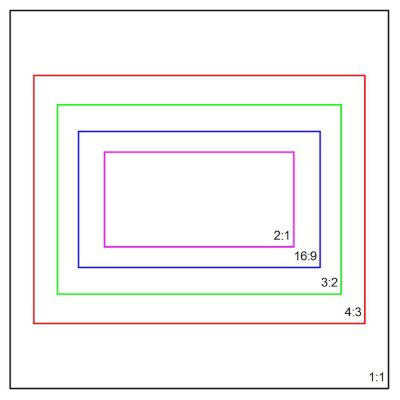 Have you ever seen those pictures or movies scenes where the citylights in the background are blaring, blurred circles of light? This is a technique called bokeh. This is achieved when the highlights of the image are blurred out of focus, with a very shallow depth of field, to achieve this dreamy, almost magical, look in your image. 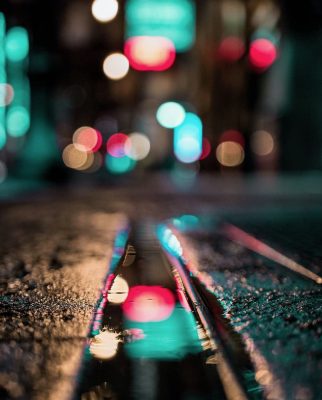 Double exposure is when two photographs are overlaid on top of one another to create a single image. You can also have multiple exposure, where there’s more than 2 images that are combined into one image, to create a really interesting, and even symbolic effect, for your pictures. While you can digitally get this effect through editing by combining images and changing their transparencies, old film cameras would actually use the same piece of film, and expose it twice. 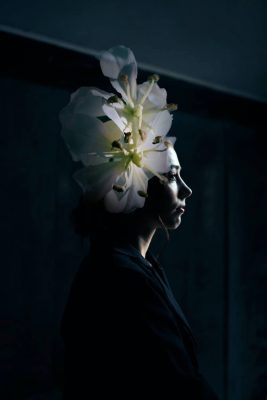 There are many photography terms and tips you can learn to improve your photography skills – but most of your abilities will come through putting what you’ve learned into practice, and working with other people who have been where you are today. And if you’re ready to upskill, invest in your passions, and start telling your story like a pro, we’ve got the perfect place to help you get started:

If you want to become the next best photographer, check out the Jordan Matter Academy.

In his course, Jordan will teach you first-hand, all of the skills he’s learned to help you improve your photography, and become a pro at visual storytelling.

Sign up today for a once in a lifetime opportunity to practice your photography skills alongside passionate photographers just like you, from all around the world. Better yet – you will get to learn from an expert photographer in the industry! 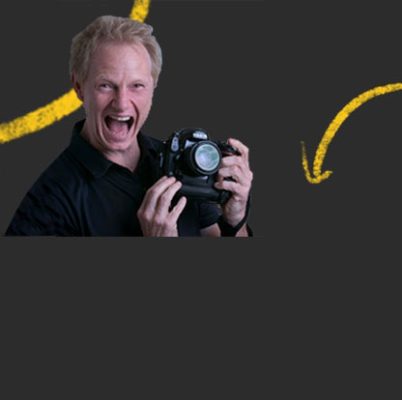